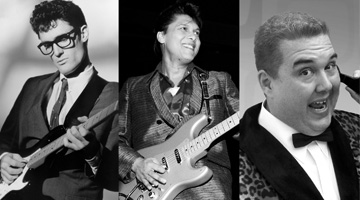 
The “Winter Dance Party®” re-creates the final tour of Buddy Holly, Ritchie Valens and the Big Bopper, the three legendary artists who died in a plane crash on Feb. 3, 1959. Each live performance includes more than two hours of unbridled entertainment featuring the artists’ hit songs of the 1950’s, including “That’ll Be The Day,” “Peggy Sue,” “Oh, Boy,” “Rave On,” “La Bamba,” “Chantilly Lace” and many more.

Mueller, the critically acclaimed former star of the U.S. touring version of the London/Broadway hit musical “Buddy - the Buddy Holly Story,” performs as Buddy Holly, with Ray Anthony as Ritchie Valens and Linwood Sasser as the Big Bopper. The artists will be joined on-stage by an energetic four-piece band that features the guitar, drums, stand-up bass and saxophone, the latter being played by Grammy Award-winning saxophone player Mike Acosta.

The “Winter Dance Party®” has performed for nationally televised audiences, toured extensively throughout the U.S. and Canada, and performed alongside John Mellencamp, Marshall Crenshaw and others at the Rock and Roll Hall of Fame.